Rapid Fit is run on a franchise model and has garages all over the UK. Our client owns two such franchise garages, based in the city of Bristol and nearby rural town of Yeovil.

We have been engaged to look into the performance of both garages, seeking out ways which their revenues might be improved.

Key to this case is the candidate’s ability to appropriately segment the different factors contributing to the garages’ revenue.

First, the candidate will have to break down the various factors affecting revenue and then benchmark these against the nationwide average for Rapid Fit garages.

Second, the candidate will have to generate and then test hypotheses, to see which improvements are feasible.

Identifying and Structuring the Problem

The candidate should begin by asking appropriate clarificatory questions and structuring their initial approach to the client's problem.

The following information can be given to the candidate, upon request:

- Garages are divided into a number of bays, each of which can attend to one car at a time

- Annual revenue for the Bristol garage is 8m

- Population of Bristol is approximately 500k

- Annual revenue for the Yeovil garage is 5m

- Population of Yeovil town is approximately 50k, though the garage there also serves the wider rural area

- The client’s aim is to maximise revenues for both garages

The revenue for each garage can be broken down as follows:

Number of cars per day can be further broken down:

The candidate can also present this equation in the form of a tree structure, similar to that shown:

The candidate can present this breakdown as either an equation or a tree structure.

If the candidate does not arrive at this mathematical breakdown by themselves, they should be guided towards and eventually given the equation so that they can proceed with the remainder of the case.


The candidate should decide which garage they wish to look at first.

Opening hours are identical at 9am-6pm for all franchises nationwide

The candidate should be asked to hypothesise why such uneven demand is observed.

They should arrive at the answer that demand is higher around customer’s lunch breaks and away from times when cars are being used to commute to work and/or school runs etc.

The candidate should summarise their key findings from the information they have received thus far and note how revenues might be increased for each garage based on this.

- Lower than average number of bays, which limits revenue.

- Lower than average time per car, which boosts revenue.

- Occupancy is close to the national average.

- Revenue close to the national average.

As such, increasing the number of bays might increase revenue if there is sufficient demand to support this.

- Higher than average number of bays, which helps boost revenue.

- Higher than average timer per car, which limits revenue.

- Occupancy is close to the national average.

- Revenue above the franchise average.

As such, reducing the time per car to something closer to the franchise average would increase revenue if there is sufficient demand to support the increased throughput of cars.

Before moving directly to making recommendations, the candidate should consider which of the factors influencing revenue are actually amenable to change.

The relevant factors are:

Spend per car is determined by pricing, product assortment, marketing etc are under the control of Rapid Fit nationally and not able to be changed by our client. Opening hours are similarly decided nationally.

The factors under our client's control generally are the number of bays per garage and the time per car. Our client might be able to influence occupancy, but both garages are at the national average, so this is unlikely to be readily amenable to improvement.

However, we must still ascertain whether these factors can actually be changed in the two specific garages in Bristol and Yeovil.

The candidate should take a structured approach to establishing whether the suggested improvements for Yeovil and Bristol are actually viable for those specific garages to carry out.

Is increasing the number of bays in Yeovil viable?

The answer here depends upon two separate factors which we can consider via two smaller questions:

1. Is there sufficient demand to make use of additional bays?

2. Is it possible to construct more bays in this location?

We must be able to answer both of these smaller questions in the affirmative for the option of increasing the number of bays in the Yeovil garage to be viable in practice.

We can address each of these two questions in sequence:

The candidate should ask for additional information on demand.

The candidate can be given the following information on request:

At times of peak demand, bay occupancy is 100% and there is an average queue of five cars waiting to be attended to.

Away from peak demand, bay occupancy is only around 60%, so additional bays will not increase throughput of cars at those times.


The takeaway is that building more bays will allow us to boost revenue by increasing daily number of cars.

Five additional bays would allow the Yeovil garage to cater to all customers at peak demand without having excess capacity at these times.

The candidate should first be asked to brainstorm factors which will determine whether bays can be built or not.

The candidate should ask for information as to whether it is possible to build more bays at the Yeovil site.

On request, the candidate can be given the following information:

There is no room for additional bays in the current structure of the Yeovil garage.

The site generally is already set out optimally, with no feasible way to fit more bays onto the current land.

The site is surrounded by other buildings, all of which would be much too expensive to purchase to make way for more bays and many of which are “listed buildings” – that is, enjoying government protection from demolition or significant alteration.

There is sufficient demand to mean that increasing the number of bays would yield increased revenue. However, it is not possible to add more bays to the Yeovil garage. This is because the site already has as many bays as will fit on the land area and it is not feasible to acquire more buildings or land to extend the site.

Is decreasing the time per car in Bristol viable?

Here we need to establish:

1. Is there sufficient demand to support a higher throughput of cars?

2. Is it possible to reduce the time spent per car in the Bristol garage?

The candidate can be informed that there is a level and daily distribution of surplus demand much like that at the Yeovil garage.

Therefore, changing working practices/retraining staff in the Bristol garage should be sufficient to reduce time per car.

It is possible that staff from Yeovil could be rotated through Bristol or otherwise be leveraged to spread best practices to Bristol.

There is both sufficient demand and a clear means by which to decrease time taken per car. Doing so would allow the Bristol garage to accommodate at least some of the excess demand at peak times.

The candidate should supply a brief, structured client recommendation, approximating the following:

Of the factors influencing revenue, only number of bays and time per car are under our control and amenable to change.

For the Yeovil garage, time per car was already low. Increasing number of bays would increase revenue in principle, but this is not viable in practice.

In the Bristol garage, bay number was already high. Decreasing the time spent per car should be readily feasible by importing practices from the Yeovil garage. 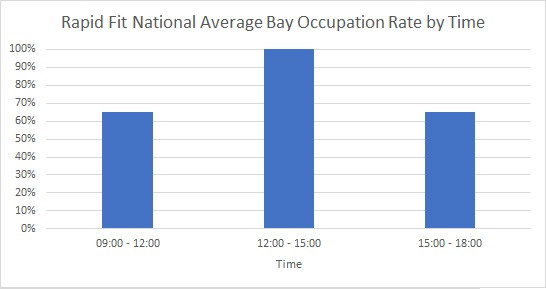