Scholar’s Rest (SR) is a Scottish company providing private student accommodation in university towns. For the most part, they accommodate international students who want to avoid negotiating the general property market in the area.

Six years ago, SR started their business by setting up an accommodation block in Glasgow. This year, they have set up their second block, this time in Edinburgh.

The owner has engaged us as they are concerned about the profitability of this new Edinburgh venture.

This case requires the candidate to realise that the client’s concern is unjustified, as the Edinburgh accommodation returns a healthier profit margin than the original Glasgow block.

Analysis will require use of the standard profitability equation as a basis to understand SR’s situation.

We are concerned with profitability, which is a synthesis of revenue and costs.

We start on the revenue side, where the data is rather simpler.

When the candidate requests revenue data, they should be asked to first brainstorm and estimate possible revenue streams
Show the candidate EXHIBIT 1
The following information about the wider market can be shared with the candidate on request:

The accommodation will tend to be occupied by undergraduate or master’s students between the ages of 18-22. They tend to stay for one to four years before moving on.

Other companies do provide similar services, but we do not have data on them.

The Edinburgh block actually generates more revenue per room than the Glasgow accommodation. The Edinburgh rooms also have a higher occupancy rate.

However, to have a full view of profitability, we still need to consider costs.

The candidate should request data on SR’s costs.

The following information can be shared with the candidate upon request:

Scholar’s Rest employs very few staff directly, aside from a few individuals handling admin and related tasks. Cleaning, maintenance etc for the Glasgow and Edinburgh blocks are outsourced to other companies.

The SG&A costs for the Glasgow accommodation were not reduced when the Edinburgh block was opened.

Costs for the Edinburgh wing of the business are higher.

Higher costs make sense in the context of a more expensive city and the accommodation block offering a better quality service, notably via its leisure/gym facilities.

The Edinburgh block has costs associated with the leisure/gym facilities, which are absent from the Glasgow block.

The candidate is now in a position to calculate the profit generated by each of the accommodation blocks.

The new accommodation block in Edinburgh is profitable. Whilst the absolute amount of profit generated is lower, the profit margin of the Edinburgh side of the business is higher.

As such, the client has no reason to worry about the profitability of their Edinburgh operation if they were already content with their Glasgow business.

The candidate should provide a well-reasoned and well-supported recommendation for the Scholar’s Rest. One such possible recommendation would be as follows:

If Scholar’s Rest are interested in improving their overall profitability, there are a few ways in which they might go about it:

The Edinburgh block shows that high occupancy rates are possible. SR should attempt to replicate this occupancy rate in its Glasgow block.

Currently, 16% of the Glasgow rooms are unoccupied. Increasing occupancy to the levels enjoyed in Edinburgh would increase profits significantly.

In order to increase occupancy, SR might attempt to make the block more appealing to potential residents. One way to do this would be to replicate the gym/leisure facilities from the Edinburgh block.

Otherwise, SR might increase occupancy by increasing advertising/marketing activity, targeting students coming to study in Glasgow. If they do not already, they might wish to partner Glasgow-based universities, liaising with university offices responsible for admissions and international students – who will have an interest in recommending good quality accommodation to students.

The company could generate more revenue by offering additional services and facilities within their accommodation blocks.

These additions might focus on offering food and drink. Vending machines would be a simple addition, but SR might also wish to consider opening a shop, café or bar for the residents’ use.

SR may also wish to offer premium laundry and room cleaning services and could investigate whether their residents are willing and able to pay for these services.

Reduce costs via synergies between the two components of the business

It is notable that SG&A costs for the Glasgow block did not fall on the opening of the Edinburgh accommodation, which appears to duplicate SG&A. SR has scope to cut costs by merging and centralising the administration of both blocks. 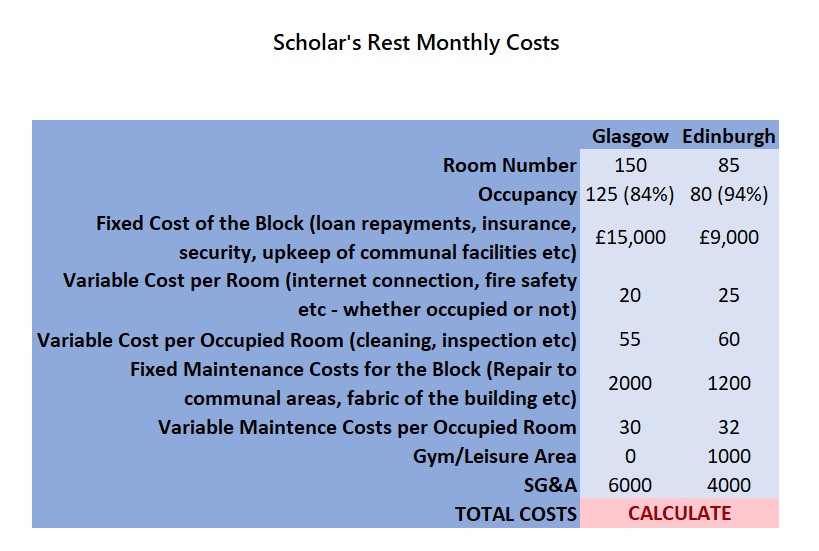