CalFer is a mid-sized steel producer based in California. They specialise in producing large, high-grade steel beams for use in engineering projects, where these beams will be subject to heavy demands.

In recent years CalFer has had strong revenues corresponding to strong profits. However, this year, the company’s revenues have dropped by 35%.

Management has engaged our services to find out what has caused this drop in revenue and to work out how to return to previous years’ revenue levels.

The candidate should begin by gathering information on CalFer.

Do not allow them to become side-tracked here, as this information is not key to the case.

The following information can be supplied upon request:

Only one product is supplied – these are standard-cross-section, high-grade steel beams, which are cut to length according to the specific client’s needs.

This kind of high-grade steel beam is only used in large engineering projects, where they will be part of structures with very high overall costs.

These steel beams are a commodity – price and quality of the specific product are more-or-less standard across the market.

The candidate should gather information about CalFer market position. In particular, they should ask about:

- The size of competitor companies

- Any advantages held by competitors

The final point, regarding industry-wide revenues, is crucial to the case – the candidate must grasp that the revenue problem is not industry-wide, but specific to CalFer.

- Competitors did not experience the same fall in revenue as CalFer

- In fact, competitors saw an average uptick of 8% in revenues.

Falling revenues are only a problem for CalFer. Thus, it seems that the problem must lie with CalFer’s buyers.

The candidate should ask about the following:

- How those customers are segmented

The following information can be shared with the candidate upon request:

Sales to minor buyers have increased by 15% this year.

Six years ago, CalFer entered into a contract with the Road Group construction firm, which was itself engaged in a large, nine year project, contracted by the California State Government, to build a new network of highways and smaller roads across one part of California. CalFer agreed to supply Road Group exclusively within the construction/civil engineering sector.

This agreement meant that CalFer gained its biggest ever buyer, whilst Road Group gained the reliable, geographically local supply of quality steel required for them to deliver their highway project according to plan. The contract was stated to run for nine years – the whole duration of Road Group’s highway project.

This information is key to cracking the case – only provide the key facts in response to candidate questions.
CalFer’s exclusivity contract with Road Group is for the entire expected duration of their highway project. However, most of the elements of the highway system requiring steel – bridges, intersections etc – had their steel structures set in place early in the project, with Road Group then focusing on other activities. Most of the work on these elements requiring steel was completed by the end of last year. Now, Road Group is ordering only small amounts of steel for a few remaining elements of the project.

The candidate should form the following conclusions:

Since sales to minor buyers increased, there must have been a very large fall in sales to major buyers.

Road Groups – CalFer’s most important major buyer – has been ordering much less this year.

The candidate can conclude that CalFer’s revenue problem is not a reflection of an industry in the wider market, since competitor revenues are growing strongly. Rather, it seems the drop-off in revenue was due to Road Groups reduced volume of orders.

Making the agreement with Road Group was generally a good move by CalFer, who gained a very large buyer. However, more attention should have been paid to how Road Group’s demand for steel would fluctuate over the course of the highway project, so as to plan to balance this by securing customers in other industries. It would also have been beneficial for CalFer to require a minimum annual purchase of steel from Road Group as part of the contract.

Sell steel beams to competitor companies to resell under their own brand.

CalFer should try to get out of their contract with Road Group, so that they can sell to other buyers in that industry.

Calfer should also try to find new major buyers in other industries. For example, maritime projects like ship-building and oil rig construction should also require large amounts of high-grade steel

CalFer should try to differentiate their product if possible. Perhaps they could produce an even more high-grade version of their steel, so as to become the producer of choice for technically demanding engineering projects. 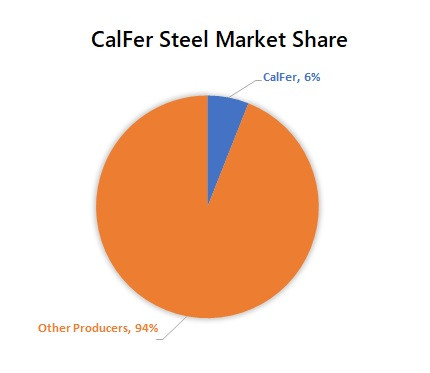 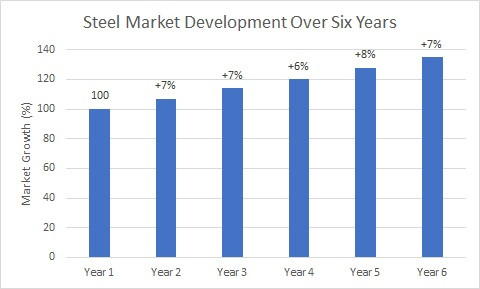