Serenity Cruises is a cruise company currently operating in the US, UK and Canada, specialized in cruises for the third age. The company is looking to expand into the German-speaking market (i.e., offering cruises taking place in different parts of the world to German-speaking customers); this would require significant effort as spoken language is a key part of the cruise experience and the company now offers its services only in English. The German-speaking market looks attractive, as around 1/6 of Germans, Austrians and Swiss over 60 years old take a cruise each year.

The company would like to size its “German-speaking” market opportunity and understand whether its German-speaking business could be profitable. 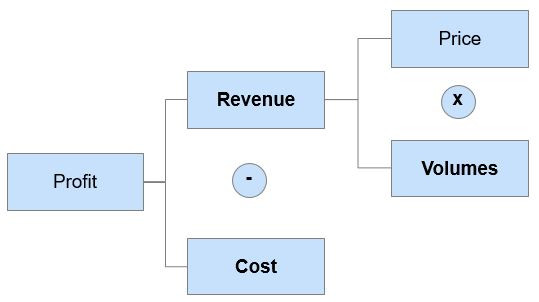 Suggested steps ranked by priority:
Make sure the interviewee understands that the key to the case is estimating market size first and costs second, in order to compute whether the business will be profitable.
If needed, share Exhibit 1 with the interviewee

This part of the case should be led by the interviewee, based on the information given at the beginning.

A reasonable assumption is that population is evenly distribution over an average life of 80 years. Thus, the number of German-speaking people over 60 years old is:

Market information to be shared:

German-speaking market for third age cruises is currently dominated by one large player with loyal customers having 60% market share, while four other smaller players share the remaining 40%.

The interviewee should assume that it would be very hard to steal customers from the leading player. The company could instead take customers from the smaller players. A reasonable estimate of potential market share is 20%, corresponding to 0.2*4 = 0.8 million customers per year

Brainstorm with the candidate the pricing and the sources of revenue:

The interviewee should enquire about the positioning of the company with respect to competitors and the share of revenues coming from extras sold on the cruise.

Serenity Cruises is going to have a pricing similar to the one of an average competitors (i.e., it is neither a premium nor a low-cost brand) and revenues from extras may be assumed to be an additional 40% over ticket revenue.
At this point, the candidate should estimate the ticket price for a one-week cruise. A reasonable estimate is 1,000 EUR per person.
After this, the candidate should compute total estimated revenues for the company in the German-speaking market:
𝑇𝑜𝑡𝑎𝑙 𝑟𝑒𝑣𝑒𝑛𝑢𝑒𝑠=𝑅𝑒𝑣𝑒𝑛𝑢𝑒𝑠 𝑝𝑒𝑟 𝑐𝑢𝑠𝑡𝑜𝑚𝑒𝑟∗𝑛𝑢𝑚𝑏𝑒𝑟 𝑜𝑓 𝑐𝑢𝑠𝑡𝑜𝑚𝑒𝑟𝑠
Thus:

Brainstorm with the candidate the main cost items of a cruise company:

Share Exhibit 2 with the candidate. It shows data to compute the additional number of ships that the company must have to serve the German market.

The candidate should estimate the additional number of ships that must be ordered by the company:

Customers per ship must be computed as average capacity times average occupancy, 4,500*0.9 = ~4,000.
Cruises per year are 40*1 = 40.
Thus:
Share Exhibit 3 with the candidate. It shows data to compute yearly costs for the company.

Additional information to be shared together with the table:

Yearly depreciation may be computed as follows:

Yearly payroll costs may be computed as follows (assuming each employee works on one ship for the whole 40 weeks per year):

Finally, SG&A costs are equal to:

The German-speaking business seems profitable and an EBIT/Revenue ratio of 25-30% seems a very good number.

The candidate should be able to argue that the vast majority of the costs are fixed. In particular, depreciation, fuel and payroll costs are entirely fixed because ships are going to navigate and operate independently of the number of tickets sold. One could argue that some of the operating costs (e.g., food) and a good part of the SG&A costs (e.g., agency fees) are variable. However, this does not change the fact that cruises are a fixed-cost business.
As a consequence of this, the candidate should be able to understand that a key business parameter is occupancy: ships must have the highest possible occupancy because, with very low variable costs, marginal profit is essentially marginal revenue.

In order to sustain high occupancy, the keys are:

The German-speaking market seems like a very good market mainly because of its size, 4 million customers a year over 60 years old, and the fragmentation of the competitors behind the market leader. The recommendation is to enter the market, provided that the company quickly adapts to satisfy the needs of the new German-speaking customers, in order to maintain high occupancy on the ships.

Potential other factors to be considered include:
6. Final recommendation
A preliminary analysis shows that Serenity Cruises should enter the German-speaking market as it would generate 310m EUR profit/year, with an EBIT margin of 25%-30%. The market looks attractive due to its large market its size with 4 million customers over 60 years old and the fragmentation of the competitors behind the market leader. Once it enters the market, Serenity Cruises should quickly adapt to satisfy the needs of the new German-speaking customers, in order to maintain high occupancy on the ships.
Exhibits