Our client, Gasgen Inc. is a French gas sales and distribution provider. They currently enjoy a monopoly in the market. However, they have heard murmurs about the potential liberalization of this segment in the coming years.

They want to be prepared in case it happens. They have hired us to answer two key questions:

Key question: If the market gets liberalized, what would be the competitive intensity and what kind of players are likely to enter the market?
Allow the candidate some time to build a case structure and approach.
The candidate should go through the following steps:

The interviewee should enquire about the market in order to develop a better understanding of the segment.

Gasgen Inc. is the only provider of gas in France. It has two key business activities:

Gasgen Inc. is not involved in the production of the gas. It procures the gas and is then involved in its sales and distribution.

In the event of liberalization, other competitors would be allowed to sell gas to households and corporates. However, due to the capital intensive nature of distribution, Gasgen Inc. would continue to have a monopoly over the distribution network. The Government would supervise this activity, in order to ensure equal access to all competitors after liberalization.

A good candidate would argue as follows:

Thus the market is likely to see low single digit growth or even a decline in the coming years. With limited new customers being available, new entrants would have to gain share from the incumbent. This can be done either by lowering price or by offering a better product. Since gas is a commodity, it is likely that a new entrant would reduce prices in order to gain market share. 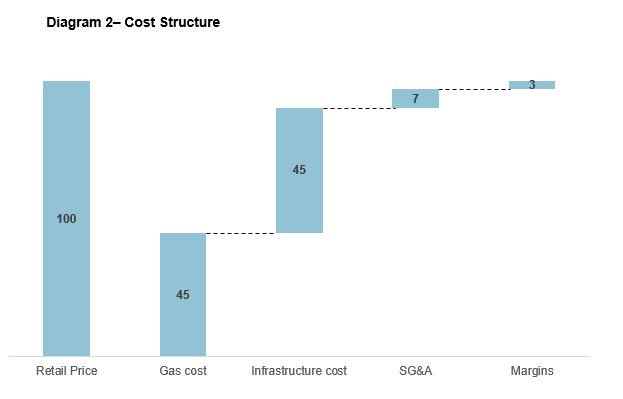 Ask the candidate what he/she thinks about the cost structure. Which of the cost heads given in the structure can potentially be reduced by a new entrant?

Some probable answers could be:

Ask the candidate to calculate the potential for price reduction in $, assuming that the average gas bill is 500 $. If the candidate asks for information on the savings on SG&A and margins - ask him/her to make their own reasonable assumptions and give a guesstimate of the potential savings. Ask them to ignore the increase in marketing spends for this calculation.

Using the average gas bill value at 500$, the following costs can be calculated:

The cost structure and the average bill, shared earlier was for a normal i.e 'cold' winter season. Houses with better insulation are a risk; however it is difficult to measure their impact and hence must be ignored.

The candidate must now calculate the impact of climate variability on the margins. If required, prompt him to do so.
Share Exhibit 3 with the interviewee and ask him to use it as a structure to estimate the impact. 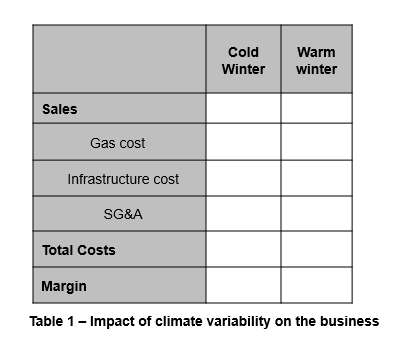 For a 'warm' winter, the following costs can be calculated: 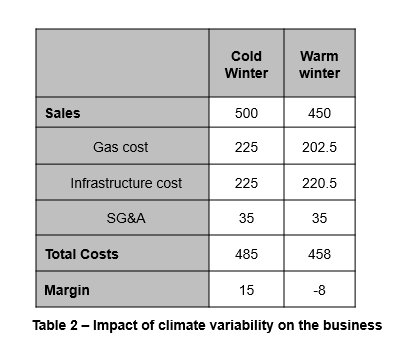 Key insight
The business is susceptible to climate variability and hence risky. In 'warm' winters, the margins become negative. The margins in this segment are already very thin. That, coupled with the risk of negative margins during 'warm' winters would make the market unattractive for new entrants.

Although it has been established that the market is unattractive, ask the candidate to think of scenarios where some of the assumptions made in the case so far would not hold true? Prompt her to think of the kind of competitors who would still enter this market.

The market is stagnant with zero to low growth prospects. The current cost structure of the industry offers very thin margins and has the risk of negative margins during 'warm' winters. This makes the segment unattractive for new entrants and therefore in the event of liberalization, the segment would not attract a lot of competitors.
However, there is the risk of an existing energy player entering the segment in the event of liberalization. Such a player would have significant synergies with its existing business and would therefore be able to mitigate some of the risks.
Exhibits