FoodDelivery is an Italian start-up that is developing a service to deliver food at home from a wide range of restaurants, mainly targeting affluent people. Food is delivered by bike-riders and customers can order it through a specific app. The application allows customers to choose the restaurant and the menu, among a selection of restaurants in a range of 3 kilometers from the customer’s position.

The service will be launched shortly in Milan and it will be the first one of this type in the city.

In your opinion, is this business profitable?

Key question: Will there be enough revenues in Milan to sustain the costs necessary for the service? 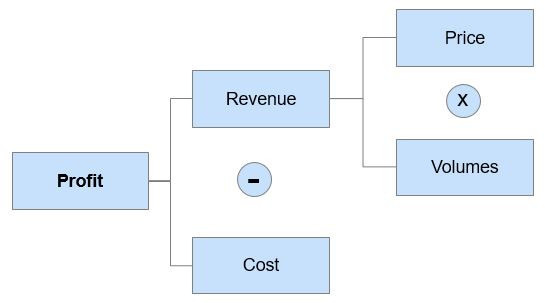 Suggested steps ranked by priority:
Make sure the interviewee builds a solid structure that includes all the above 3 elements
If needed, share Exhibit 1 with the interviewee

The interviewee should enquire about the revenues related to FoodDelivery service

The interviewee should be able to:

Considering the table above, the interviewee should recognize that it is reasonable to assume that the population with income above € 40,000 is the most inclined to use the service.

Based on market research, about 1/3 of the people within the highest income range in Milan are interested in ordering food once a week

Considering that FoodDelivery is a first mover in the sector (thus having no competitors), the interviewee should assume that 1/3 of the people within the highest income range would order food through the app once a week. In order to be conservative, we are going to assume that nobody from the other income ranges is interested in the service. This will also compensate the fact that not all people who turned out to be “interested” according to the market research will actually use the service.

Thus, it is possible to obtain the market size for a year

where 52 is the number of weeks in a year.

Assume that the average order in Milan is about € 40
Thus, it is possible to calculate the annual revenues associated with the delivery service for the market size
(7%+3%)∗40∗7.8 𝑚𝑖𝑙𝑙𝑖𝑜𝑛=€ 31.2 𝑚𝑖𝑙𝑙𝑖𝑜𝑛

The interviewee should recognize both the fixed costs and the variable ones associated with the service:

The interviewee should understand that the average capacity of a rider is:

At this point, it is possible to calculate the costs associated to the market size in Milan.

Thus, the profit is equal to

In conclusion, the business is profitable.

Prompt the interviewee to reason on how the cost structure would change if new labor regulation forced the company to hire bike-riders, instead of paying them “per hour”, as it happens now; moreover, ask the interviewee how this would impact the expansion strategy and what are the main challenges for the company, as the appearance of new entrants in the market

FoodDelivery will generate an annual profit of about €4 million with revenues of about €31 million in Milan. However, over the short-medium term several risks should be taken into account, including limited barriers to entry and potential changes in regulation for bike-riders' work. In order to leverage its first mover advantage and to build barriers to entry, FoodDelivery should evaluate expanding its service to other big Italian cities after the launch in Milan.