Vault is a company providing computing hardware, mainly to investment banks and similar financial institutions. Five years ago, Vault decided to acquire software producer called FinCode. FinCode is well known in the field for providing back-office administrative software for similar financial institutions. Whilst their products have a formidable reputation for quality, FinCode do not offer any of the other kinds of software used by such institutions, such as products to support the work of analysts and traders. During its time as the software division of Vault, FinCode has not performed as hoped, with slow growth. Vault has contacted us to try to address this situation and increase revenues.

This case is quite involved and requires a few steps to solve.

Where the candidate becomes stuck on one element, they should be steered or prompted back on course so they can complete the case.

The candidate should begin by asking any basic clarificatory questions and structuring their approach to Vault/FinCode’s issues.

The candidate will need to conduct market and competitor analyses before considering what potential customers actually want from software purchases.

The candidate should consider the potential to grow FinCode by expanding into closely related markets – that is, by offering the other major types of software used by investment banks and similar institutions.

Inform the candidate that the overall software market in this area can be broken down into administrative, analyst-support and trader-support.

If the candidate asks what these systems are used for, you can explain:

Analyst-support tools manage analysts’ workflows and catalogue their findings to be leveraged in future.

Trader-support tools assist traders as they make and implement decisions.


The candidate should ask for data on the market for each kind of product.

Based on these exhibits, trader-support systems are the most attractive individual opportunity.

However, the candidate should enquire as to the trends driving the high growth rates observed.

On the candidate’s request, you can inform them of the following:

Almost half the market is dominated by a few main financial institutions.

Institutions of all sizes are aiming to cut costs and improve performance with better software tools.

Many institutions are trying to reduce the number of suppliers for their IT solutions.

FinCode’s specific focus on financial institutions would suggest that it is well placed to sell to the main players in the market. Since Vault also sells hardware to these institutions, our client should also benefit from buyers’ desire to reduce their number of IT suppliers. The fact that all sizes of institution are seeking to use new software to cut costs also suggests that there is good opportunity for growth.

Indicate that this is all the information that is available and prompt the candidate to consider Vault/FinCode’s competitors.

The candidate should now conduct an analysis of FinCode’s competitors in the software market. To do so, they should ask for information on our client’s top competitors.

However, the market for trading software is much more fragmented, with the top five players controlling only 43% of the market.

Of course, revenue is only any good if it translates into profit. Thus, the candidate should enquire as to the typical profit margins in these markets

On request, the candidate can be given the information that the average margins across the three markets are as follows:


The candidate should notice that, in the two markets which FinCode is not present in, the player that dominates one market – with a large market share and slow growth – has a small, but very rapidly growing share in the other.

The candidate is likely to require some guidance to make this realisation.

Ask the candidate to form an hypothesis to explain this pattern.

The candidate can supply the hypothesis that these players were also attempting to boost revenues by entering markets other than the one they are dominant in.

Money Lab has also entered the administrative software market and is growing there.

You can confirm this hypothesis for the candidate

Additionally, note that a particularly good candidate will observe that FinCode’s growth in the administrative market is lower than that of the market overall. This means that FinCode is slowly losing share in that market.

The candidate should also consider barriers to entry to the different markets.

These are unlikely to be the same for both of the markets which FinCode might expand into.

Analyst support systems are likely to be structurally quite similar to the administrative software which they already provide.

Trading-related systems are likely to be a great deal more involved to develop and require an intimate knowledge of how traders and markets work.

Given FinCode’s exclusive focus on finance and Vault’s experience in hardware in the same area, it is possible that our client might have an advantage here over more generalist players, who also make software outside finance.

The candidate should be prompted to consider an initial recommendation, based on their analysis so far.

The candidate can note that both the analyst-support and trading markets are promising sources of revenue growth, with the trading software being more promising for offering higher profit margins.

The candidate should consider whether the client should choose one additional market to expand into or attempt to operate in all three markets simultaneously. This leads to the question of what customers are looking for.

When they reach this point, the candidate should be directed to consider the demands of the financial institutions buying software across these markets.

The candidate should consider whether competitors offer their services as packages of multiple software types.

Of course, Vault/FinCode cannot ask other companies this question directly. However, we can ask firms in the market for such software who are not their customers. Most useful will be firms which were using FinCode until recently, but have switched to other providers.

Here, you can inform the candidate that follow-up calls were made to companies which opted to switch to providers other than FinCode. Similar themes recurred throughout these calls.
Share EXHIBIT 5 with the candidate, noting that this is a representative example of the feedback from former customers.

Customers appear to be looking for single providers who can offer the full spectrum of software required for their businesses.

The client might also note here that efforts should be made to increase satisfaction amongst existing customers.

Note that there is potential to conduct a much more searching analysis here. For instance, the candidate could look at marketing and sales practice within the client company, and if they begin to do so, this is not an incorrect step. However, this detail will not be required here and the candidate should be guided towards making their final recommendation based on the analysis so far.

The client should strongly consider entering both the analyst support and trading software markets.

Despite offering quality products, FinCode is gradually losing share in their current market. This loss seems to be to competitors who are able to offer companies the cost savings and convenience of sourcing all their software from one supplier.

Both the analyst-support and trading software markets offer strong potential for growth – especially the latter, where there is potential for high profit margins. However, the firms exhibiting the strongest growth in both of these markets are those which offer products over all three software categories.

With an expansion into trading and analyst support software, there is a clear opportunity for any company able to offer the full spectrum of software products as well as the hardware to run this on – giving more comprehensive deals and reducing supplier number even further than competitors who offer only one of software or hardware. There is also the general opportunity to cross-sell to institutions which currently use some, but not all, of Vault/FinCode’s products. 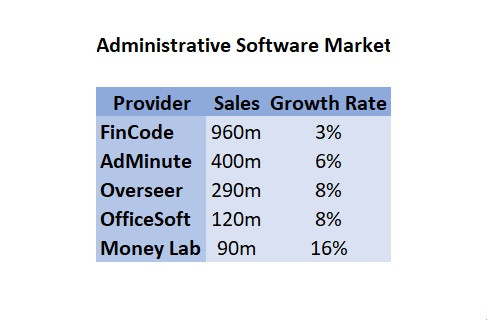 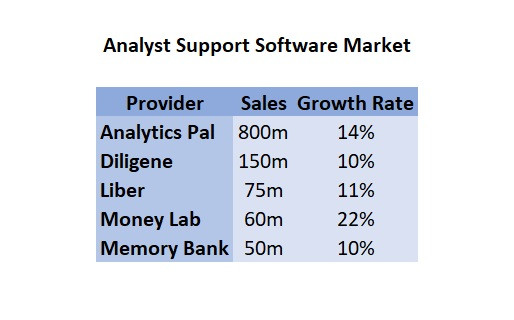 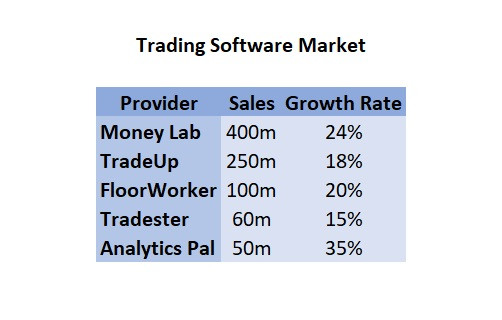 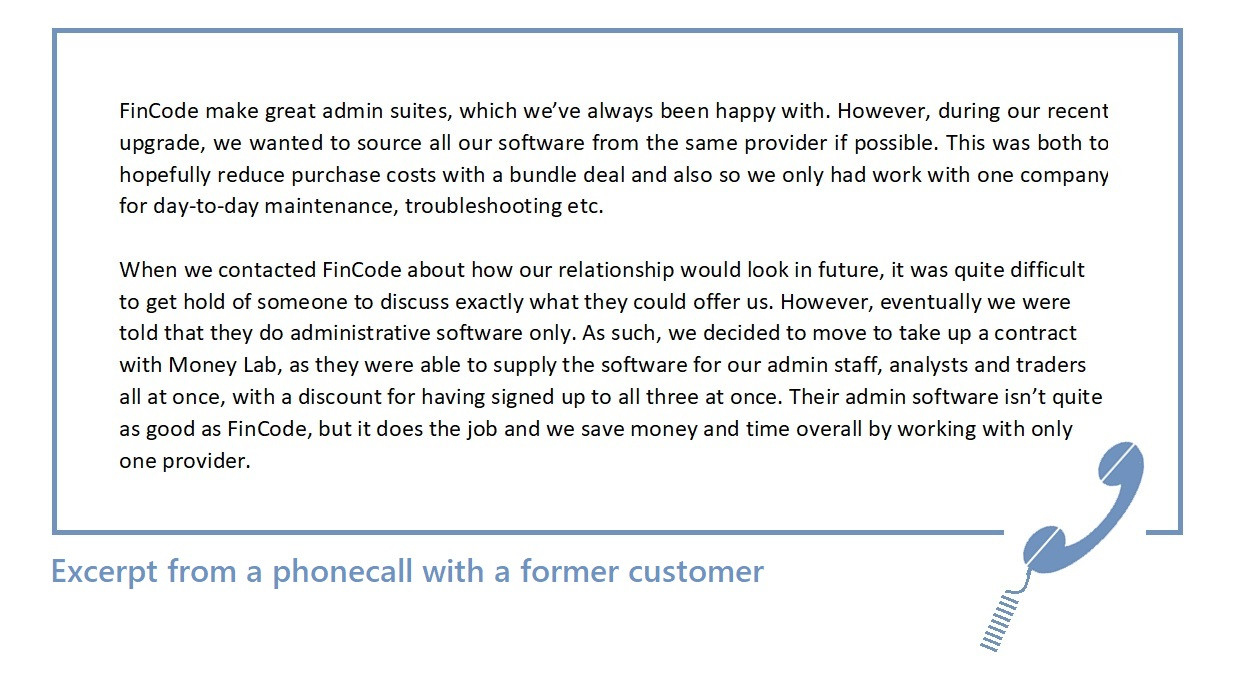