Braid’s is a very well-known, widely-recognised UK brand which has been making custard powder for over a century. Tubs of custard powder are sold to wholesalers and retailers and are eventually sold on to domestic consumers.

Braid’s has always been a major player in the custard industry, though in recent years has further increased their percentage market share. However, Braid’s has noted a simultaneous decline in profits. The firm has engaged us to find out what is going on.

This case does not call for much in the way of quantitative calculations. Instead, the candidate should focus on understanding Braid’s issues at a qualitative level.

The candidate should begin by asking well-reasoned, structured questions to gather salient information. In doing so, they should explicitly set out how they intend to tackle the case.

From the outset, ensure that the candidate understands the concept of market share. In particular, it is essential for this case that they grasp that a company might increase their percentage market share even as the market shrinks. That is, the company might account for a greater fraction of a shrinking whole.

The candidate should examine both revenues and costs as well as looking at Braid’s competitive position within the market.

The candidate should ask appropriate questions to gather salient information.

Sales volume has increased at a rate above the industry average

However, as per Exhbit 1, prices have decreased

The candidate should be shown EXHIBITS 1 and 2

The candidate should move from receiving this information to asking further questions about how the market has been changing.

Upon request, the candidate can be told that, in recent years, competition has become less intense, with some competitors leaving the industry.

The candidate should enquire as to why competitors have opted to leave the industry.

The market as a whole has seen falling revenues and profits.

Competitors who left the market felt that it was saturated.

The candidate should reason that Braid’s has likely had to lower its prices as a response to lower demand.

The candidate should consider why demand has diminished.

Custard powder is increasingly seen as both old fashioned and a poor-quality substitute for custard made from scratch.

Braid’s has come to dominate the diminishing market not only because of its lowered prices, but also because of its high brand recognition. With low demand for custard, retailers will often stock only one brand – so chose Braids as it is the best known whilst also being competitively priced.

To conclude the case, the candidate should provide a brief, top down recommendation to the client.

Since we were engaged to analyse what was causing Braid’s falling profits, they should open with this, before providing sensible recommendations as to how they might bring profit levels back up.

A good recommendation would be as follows:

Braid has gained market share as competitors have left a market in decline as custard powder has become unfashionable.

Custard powder as a product might be nearing the end of its life cycle.

Braid’s will need to take action to increase profits.

In particular, Braid’s should immediately seek to reduce its costs as far as possible to boost profit margins.

It might be that, if the market bottoms out at a certain minimum level and Braid is left without many competitors, its recognised brand name would allow it to sustain slightly higher prices without losing sales. However, further research would be required to ascertain if this was the case.

Most importantly, Braid’s should develop new products so as to enter new markets with more potential for growth/profit. 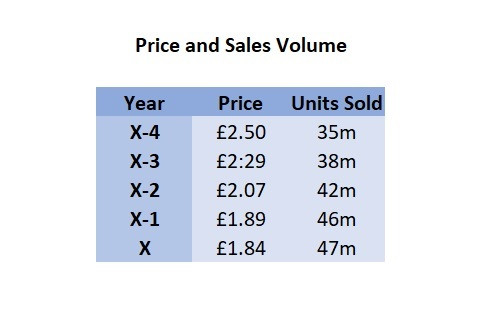 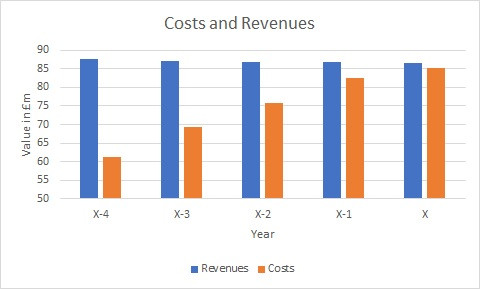