Cunningham's Coachbuilders manufacture buses and trams across the British Isles. Originally a Scottish company, they now also have factories in Northern Ireland and the Republic of Ireland. Whilst the firm has had concerns over profitability in recent years, they are excellent contenders to win a large contract to supply a new guided bus rapid transit system along commuter routes in Dublin, Ireland.

Note, a guided bus is effectively a bus/tram hybrid, operating mostly on specific tracks (a "busway"), but driving on tyres and capable of entering normal road traffic. The buses in operation in this system will be "bi-articulated" (or "bendy") buses made up of three sections each, so as to allow for maximal passenger numbers at peak times.

Our firm has been engaged to advise on whether Cunningham's should bid for the project and - if so - how they should plan their approach.

Detailed solution
Paragraphs highlighted in orange indicate hints for you on how to guide the interviewee through the case.

Paragraphs highlighted in blue can be verbally communicated to the interviewee.

Paragraphs highlighted in green indicate diagrams or tables that can be shared in the “Case exhibits” section.

The candidate should begin by asking for additional information so that they can properly understand the client's problem.

The following data can be provided:

The project would require Cunningham's to build 15 new articulated buses (simply "buses" from here on) to be rolled into operation at a rate of five per year over three years, as new busways are constructed. Cunningham's bid would be centred on charging Dublin Council €2m per bus.

No further large contracts are anticipated in the Republic of Ireland in the foreseeable future, as most bus and tram networks are operating fairly new equipment already and a cooling economy means no other major infrastructure projects are planned.

Cunningham's has an existing plant near Dublin, which it would ideally use for the project. This plant has been dormant since fulfilling an order for a new fleet of commercial coaches. The lease on the site will soon expire and full disassembly of the production line and permanent closure have been planned.

In light of recent profitability issues, the owner has decided that they will not involve themselves in any project with an expected margin of under 15%.

The candidate can make the following assumptions:

Cunningham's engineering staff have already done detailed work in calculating material costs and man hours for each of the units required. This is shown in Exhibit 1.

Show the candidate Exhibit 1
In the Republic of Ireland, Cunningham's cost for coachbuilding workers is €20/£18 per hour.

The lease on the factory site could be extended by the required three years. This and the other costs of maintaining the building would be £500k per year.

However, in moving from making standard coaches to bi-articulated, guided buses, the production line would need to be heavily altered, at a cost of £5m.

We can assume that the currently calculated cost of shutting down the production line at £2.5m will remain unchanged after extending the plant's use for three years.

We can assume there are no other significant fixed costs.

Note that the candidate might well confuse full articulated buses with the three "units" that each is composed of. As noted in Exhibit 1, the articulated buses here consist of one drive unit and two additional trailer units. Also note the mixed currencies, with material costs in pounds and labour costs in euros.

As planned, the project falls short of the 15% criterion value for profit margin stipulated by the company owner.

The question then is, is it possible to approach the project differently to make it more profitable?

The candidate should assume that no savings are possible in terms of raw material costs. The relevant raw materials (steel, plastics etc) are global commodities, which Cunningham's uses constantly and for which the firm already knows the cheapest sources.

Recall that Cunningham's has two other plants - one in Scotland and one in Northern Ireland. Both these plants have produced the same kind of busway system before and would not need to have their production lines altered to do so for the Dublin project.

Guided busway buses can be driven on normal roads and onto a standard car ferry, so can be transported from Northern Ireland or Scotland to Dublin for negligible costs.

In the interests of quality control and efficiency, Cunningham's is not interested in splitting production between plants, but wants to keep the production line in one location only.

Cunningham's is not able to secure finance for the extension of any plant, so capacity is capped at current levels.

The project requires five buses per year for three years. Each bus is made of three units, thus 5x3=15 units per year are required.

The Scottish plant does not have sufficient capacity to host the project, but the Northern Ireland plant does.

No investment will be required to extend leases or change production lines. The take-down cost for the Dublin plant will still be payable in any case, however.

Labour costs in Northern Ireland are 30% (£6 per hour) lower than in the Dublin region.

Overall, then, the new total profit is:

Manufacturing the guided buses in Northern Ireland and then simply driving them to Dublin easily makes the project sufficiently profitable to undertake.

On taking forward your recommendation, word comes back that Dublin Council is insisting that the contract can only be awarded if at least 25% of the work (in terms of man-hours) is done in the Republic of Ireland.

Exhibit 3 provides some salient information as to the relative time taken by different stages of production.

Note that conducting any one stage of the process in the Dublin plant might incur a certain cost of updating facilities - this being some fraction of the full £3.5m it would have required to fully convert the Dublin production line.

These costs for each production step are shown in Exhibit 4

Here, we can assume that costs of moving partially and wholly completed guided buses between Northern Ireland and Dublin to be negligible.

Conducting interior fitting in the Republic of Ireland would meet the council's requirements, but does require higher labour costs for that portion of production.

This cost is calculated as:

Note that the percentages in Exhibit 3 are for share in man hours, not share in total costs. As a further point, it might be sensible to consider whether the man hours required for any one task will be equal across different plants, where different equipment might be available.

Note that making use of the Dublin plant for any purpose will require extending the lease and maintaining the building at the same cost of £500k per annum and that the eventual £2.5m take-down cost for the production line continues to be payable in all cases.

Now then, the additional costs of moving the final stage of production to Dublin are:

This means that the new profit is:

This plan to produce the buses in Northern Ireland and finish them at the Dublin plant exceeds the criterion 15% profit margin for Cunningham's to go ahead with the bid. This is the best way to optimise profit whilst also meeting Dublin Council's requirement to have some work done domestically.

The candidate is now able to provide a final recommendation to Cunningham's.

Cunningham's should bid on the basis of the plan developed above, whereby they build buses in Northern Ireland and drive them to Dublin for finishing.

This allows Cunningham's to maximise profits within the restraints set by Dublin Council and is sufficient to generate a profit margin above the 15% criterion value set by Cunningham's owner.

Other Factors to Consider

You can discuss the following ideas with the candidate, which take account of aspects of the case which might have been over-simplified or otherwise neglected in our analysis.

There are a number of costs and complications that our analysis here might have passed over. For example, the risk that the euro pound exchange rate might significantly change over the duration of the project and possible taxation and compliance issues emerging from working across two jurisdictions. 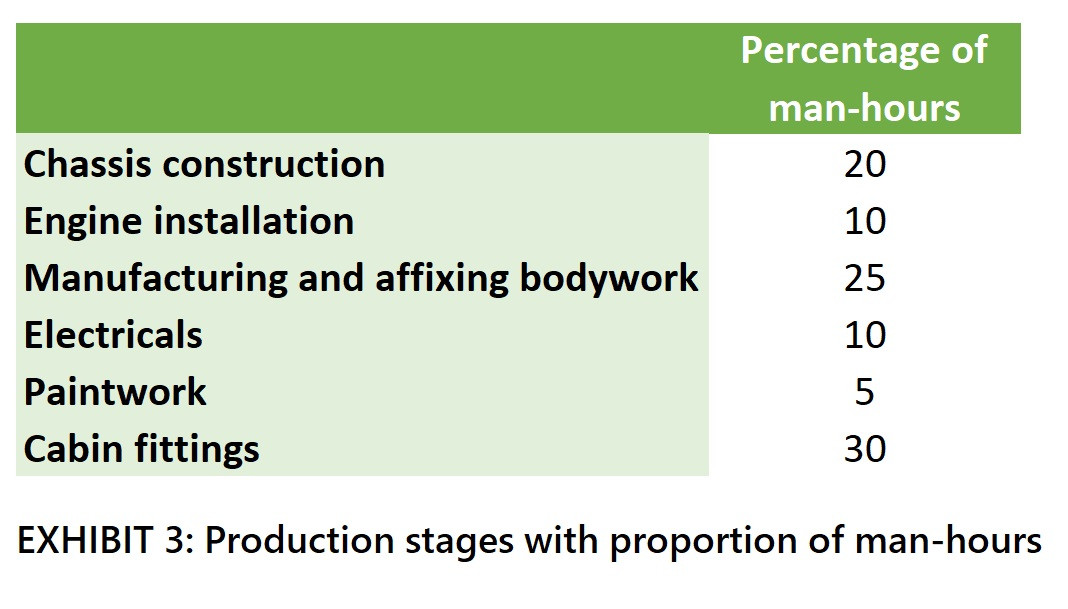