Credit Francais is a medium-sized French bank that is currently struggling due to diminishing interest earnings and increased cost of risk due to the slow recovery of the French economy. The CEO of the company is looking for ways to revitalize the bank and is currently evaluating two options proposed by the top management. The first option is to expand into the consumer credit market, something the bank has never done before: the Chief Marketing Officer argues that the market looks very attractive as high interests may be charged to the customers. The second option is to increase the penetration of asset management products, in order to increase revenue from commissions. Both options require a significant upfront investment.

The CEO called you in order to evaluate the two options and asked for a recommendation.

Key question: How much is the return on investment of the two options?
Exhibit 1 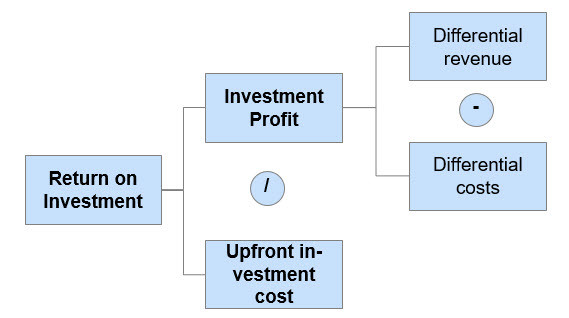 Suggested steps ranked by priority:
Make sure the interviewee understands that the key to the case is to compute differential revenue and differential costs for each of the two options and then compare them based on the Return On Investment.
If needed, share Exhibit 1 with the interviewee

At this point, brainstorm with the interviewee the sources of revenue and costs for both the initiatives:

Share Exhibit 2 with the interviewee. It shows data to compute the additional profits linked to the expansion into the consumer credit market
Exhibit 2:

The additional revenue for each client category may be computed as follows:

The employee cost for a particular segment may thus be computed as:

Total yearly costs and profits for the asset management initiative are thus:

The interviewee should now inquire on the constraints that the bank has on its investments, in order to understand whether the recommendation should be based on the project with the highest annual profit or on the project with the highest ROI.
The interviewee should be told that the upfront investment costs would be taken from a “special projects” budget, which is pre-determined and not changeable. The budget is sufficiently large to accommodate either of the two initiatives (but not both of them at the same time) and the remaining part of the budget would be invested in a project with a 130% per annum ROI.

As we have budget constraints, investments should be ranked from the highest ROI to the lowest ROI. Thus, the company should pursue the asset management initiative and use the remaining money of the “special projects” budget for the alternative investment yielding a 130% per annum ROI.

A deeper analysis shows that each of the initiatives is actually made up by three “lower-level” initiatives, which could be carried out on a stand-alone point of view. Thus, the previous solution is not necessarily the one that will generate the highest ROI, because it has been identified by examining only two sets of possible initiatives. A more thorough analysis would thus require to compute the additional profits of each of the six initiatives, ask the interviewer to split the upfront investment costs into costs for each one of the initiatives and compute the ROI of each initiative. Then, initiatives would be ranked from the one with highest ROI to the one with lowest ROI (including the alternative investment) and would be chosen in order up to the cap of the “special projects” budget.

Prompt the interviewee to focus on potential risks and other factors that should be considered
Several other factors could affect the revenue increase and the ROI:
Exhibits